We accept the following credit cards

Version as of image: color
Any questions about this product? 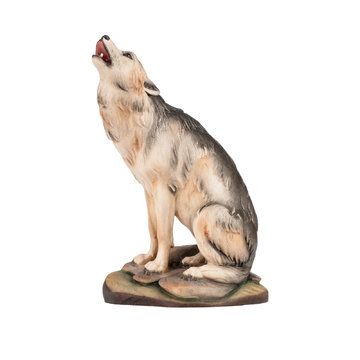 The wolf lives in several different habitats, since it is a very adaptable animal: from the Arctic tundra to the deserts of North America and Asia, however, it is mainly found in forests and grassland. The wolf also lives in humid lands, bush lands, cultivated land, rocky regions and mountains up to 2400 meters high. Since man has driven wolves out from the beginning, they are mainly known as forest animals. Wolves have been persecuted from the 15th century until the end of the 20th century, when they were set under protection in many countries. Since then the number of wolves has also increased again in Europe.

Wolves have a strongly marked social and territorial behavior. The wolf lives in pack, which is usually given by its own family and consists of the parents and the puppies. The pack can also have other structures, since the animals at the beginning of their sexual maturity often join other packs or even form their own one.

The wood carved wolf is a beautiful execution of the wood carving artisans of Val Gardena. The wolf is sitting while he gives his "social call", the howling. With the howling the wolf communicates what is his location and tries in this way to protect its territory. The wood carved wolf is available in several sizes and in the variants natural, stained three colors and color, in our woodcarvings shop in St. Christina in South Tyrol as well as in our onlineshop.
The woodcarved statue of the wolf is also available as wolf group.

Available versions and sizes:
all prices are VAT included