Luke the Evangelist is one of the Four Evangelists and authors of Jesus Christ Gospels. Luke was born in Antioch in Syria.

In the New Testament, Luke is mentioned as a doctor, although he is thought to have been both a physician and a disciple of Paul.

Luke died at age 84 in Boeotia, his tomb was located in Thebes (Greece), from whence his relics were transferred first to Constantinople, later to Padua.

In traditional paintings, St. Luke is often accompanied by an ox or bull, usually having wings. This is his Evangelic symbol.

The relics of St. Luke are so divided:
the body, in the Abbey of Santa Giustina in Padua;
the head, in the St. Vitus Cathedral in Prague;
a rib, at his tomb in Thebes. 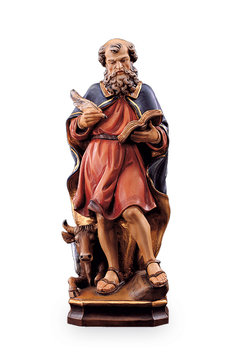