Simon Peter was born in Galilee. With his brother Andrew, he worked as a fisherman at the Lake of Galilee, when he met Jesus. He decided to follow Jesus. Simon Peter was soon placed at the top of the twelve apostles. He evangelized in different places of nowadays Turkey. Peter received his name by Jesus: "You are Peter, the Rock, and upon this rock I will build my church." He became the undisputed leader of the twelve apostles and together with Paul, he laid the foundation for the Catholic Church.
Peter was the first bishop and pope of Rome. Later, he was executed. As the crucifixion was imminent, Peter insisted to be nailed with the head down to the cross because he didn’t feel worth to die upright on the cross like Jesus Christ.
The inverted cross is therefore called "St. Peter's Cross". Some Catholic churches dedicated to Saint Peter carry the cross on the steeple.
Peter and Paul were buried together in the Via Appia in Rome.

Simon Peter is represented as an apostle or as Pope, with fish, cross, keys, tap, at the crucifixion head down, as he proposes water from the rocks or along with Paul. 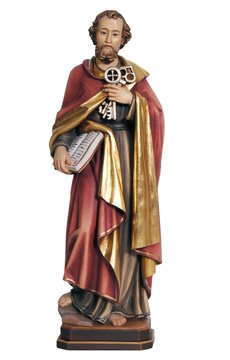