According to legend, Sebastian was born at Narbonne in the France of today. He was grown up in Milan, the city of his mother, where he was educated as well. Sebastian was a highly regarded soldier of the Emperor Diocletian. However, as the empeor learned that Sebastian was a Christian, he did condemn him to death. Sebastian was tied to a tree trunk and shot to dead with arrows. The widow of Castulus, Irene, find him and nursed him until he was fine again. Shortly after his recovery, he turned against the Emperor and publicly protested against the cruelty which was applied against the Christians. At the beginning, the emperor was shocked because he thought Sebastian was dead, but then he finally let him clubbing in Circus of Rome. His body was thrown in the Cloaca Maxima, the sewer of Rome. The body was brought by a Christian from the water and buried in the Via Appia, where nowadays is set the Basilica of San Sebastiano.

Saint of soldiers and gun clubs, against enemies of religion, animal diseases and plague. 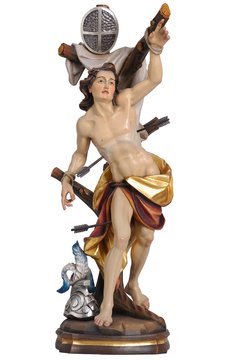