Andrew, the brother of Simon Peter and son of John, was born in Bethsaida on the Sea of Galilee. He was a fishermen and the legend tells about him as about a disciple of Jesus. Andrew recognized Jesus as the Messiah and introduced him to his brother.

Andrew was martyred by crucifixion. However, he was not nailed like Jesus but bound. In addition, the cross might have been X-shaped, this is why it is called Crux decussata, today commonly known as a "Saint Andrew's Cross". 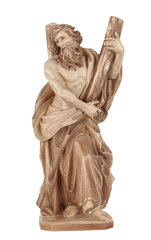