This meeting caused an important change in Saul, so that he became the most faithful follower of Christ, the Apostle Paul. After his baptism, he firstly retired, than he started with his missionary travels. Paul founded Christian communities in all the places he visited.

However, once he reached Jerusalem, he get himself involved into strong conflicts with the Jews and was arrested. He remained under military control, although he was allowed to move freely. He continued to work on the spread of Christianity and he  met this way Peter. Paul was arrested again in Rome and eventually sentenced to death. According to legend, he was beheaded and his head hit three times on the floor when falling. Three fountains arose at these three points.

The bones of the saint are located in different places in Rome: half of his body rests in St. Peter's, the other half in San Paolo Fuori le Mura and his head in the Lateran.

Presentation: with a long face, almost bald head and long beard, with book, sword (due to the decapitation), letters, scroll, overturned altar, three fountains, but often also with Peter.

Patron: of Rome, Umbria, Malta, Kavala in Greece, Poznan in Poland, the Catholic press, the theologians, the pastor, the workers, weavers, basket makers, rope, saddle, with boat trips, for rain, against the sterility of the fields , against fear, against storms, against diseases of the ear and spasms, against snake bites. 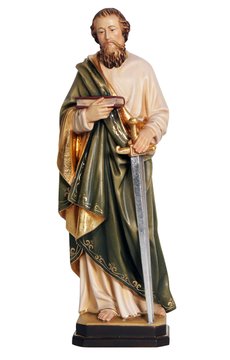